Kneadatite Green Stuff modelling putty is used worldwide by professional model makers and craft enthusiasts to bring their creations to live. Here are some of their tips as to how to best use Green Stuff in your own projects.

How to mix Green Stuff

The first stage of using Green Stuff is mixing the putty together. If you are working with Green Stuff Reel, then this is fairly simple – cut off the required amount of putty and then mix the reel together until the yellow filler and blue hardener have turned green.

There should be no streaks in the mixed putty and you will be able to feel that it is correctly mixed when it begins to feel sticky to touch and is starting to stick to your fingers.

Green Stuff Reel is manufactured to give a 50-50 mix ratio. A 50-50 mix is suitable for most tasks such as gap filling, conversions and sculpting. Sometimes though it can be desirable to adjust the mix ratio, depending on the job at hand.

Green Stuff Stick supplies the filler and hardener as separate components, which gives the user greater control over the mixing process.

Increasing the amount of blue hardener in the ratio will lead to a harder, faster-curing putty. It will be a darker green in colour and less sticky. This ratio of mixing is used for jobs when stronger putty is required.

Some model makers will mix a ratio of three parts blue to one part yellow when they need a super-firm putty.

For more detailed work, you should increase the ratio of yellow filler to blue hardener. This will form a lighter green putty which is slower to cure and much more flexible for carving and sculpting.

The world’s leading fantasy miniature creators will mix as much as four or five parts yellow to one part blue when carving intricate goblins, orcs and other characters that require greater detail and a longer working time.

Mixing Green Stuff with other putties

It can often be desirable to create a much firmer, stiffer putty than is possible even when changing the mixing ratios of Green Stuff.

When this is the case, then Green Stuff can be mixed with other modelling putties such as Geomfix A+B Original. Geomfix will strengthen Green Stuff for carving while taking away some of its stickiness and turning the putty into more of a clay-like substance.

For larger models, Milliput can be mixed with Green Stuff to reduce the cost of the project. Milliput is generally cheaper to buy and although nowhere near as flexible as either Green Stuff or Geomfix, it can be used for bulking out bigger sculpts before adding a layer of Green Stuff on top into which you can add detail.

Green Stuff is stickier than most modelling putties, so many model makers will wet their fingers to prevent it sticking. Water is fine for this, but when it comes to lubricating your tools for the cutting and carving of the curing putty, then you may want something a little more heavy duty.

There is no right or wrong answer when it comes to what lubricant you should use – it’s often a case of trial and error, personal preference and finding what works best for you.

Water, olive oil, vaseline, petroleum jelly, saliva and even sweat have all been used by model makers in the past.

Green Stuff can be applied to plastic, resin and metal miniatures and then moulded into shape or carved.

To carve and sculpt it you will need a set of blades or tools to carry out the job. There are a whole range of different craft knives and blades available on the market, each offering a different cut or finish.

A kit like the Swann-Morton ACM Tool Kit can provide a good starting point. It comes with 13 different blades and three different handles which cover a range of different cutting requirements.

The working time of Green Stuff

The working time of Green Stuff is dependent on a number of factors, including the mixing ratio and the temperature in which you are working with the modelling putty.

Generally, a 50-50 mix gives a working time of between 90 minutes and 2 hours. Curing time is 4 to 5 hours and it will reach maximum hardness 20 to 24 hours after mixing.

After Green Stuff has cured

Once fully cured, Green Stuff is solid enough to have other components glued to it and it can be painted over.

When not being used, Green Stuff should be kept in an air tight container. Otherwise, it can go off after a long period of time, becoming hard and difficult to mix. 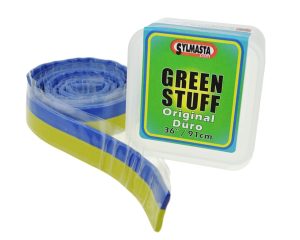 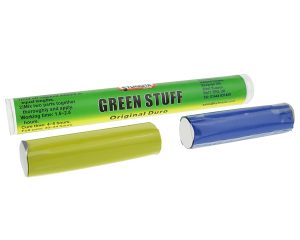